Degos Disease is a disease of the blood vessels – a thrombotic vasculopathy.

Cells in the linings of the walls of the medium and small veins and arteries under the skin swell when they become inflamed.

This causes the blood flow to be restricted.

Where this happens, spots (lesions) appear on the skin. They are small and red, slightly raised (we are building up a library of photos of Degos skin lesions on this web site: if you have any more photos, please let us know).

As they develop, the centre becomes dry and white (atrophic). Sometimes the spots itch.

You can see some typical lesions on this site at Images and at
http://tray.dermatology.uiowa.edu/Degos01.htm

In some people, the disease stays at this stage and other symptoms do not develop. We know of one patient who was diagnosed in 1973 and is still well and working full-time.

The doctors treating Degos disease don’t think of it as an autoimmune disorder. Although there is some inflammatory response to all the destruction, anti-inflammatory therapies have not been helpful in treating these patients, markers of systemic inflammation are all negative, and there are no known specific antibody tests for diagnosis. Dr Whelan has proposed referring to it as an “obliterative vasculopathy,” among a collection of similar disorders (including scleroderma) that lead to obstructed blood vessel flow through means other than inflammation.

Be aware that information on some sites is inaccurate . You will read statistics and numbers which might scare you – but they are often based on projections and on published case reports. There are lots of Degos patients whose cases haven’t been written up and who are alive and well.

There are also lots of confident assertions which just aren’t true! For example: “This disease affects mainly young men” – not in our experience! Or “The lesions don’t appear on the soles of the feet” – wrong again! Percentages and actual numbers can’t be right, as no-one has compared living patients until now. Take it all with a pinch of salt and add your experience to our site and to the data being collected in Dessau, Germany.

Our collective knowledge will make the difference between assertive inaccuracies on medical sites and clear truth on this Degos Disease site.

Most of us are leading full and normal lives. Some patients have a few lesions on the skin; others have hundreds. We don’t yet know if numbers are significant.

Sometimes the disease affects blood vessels in other parts of the body. Most commonly, the gut, the central nervous system or the eyes are involved.

Most case histories in the medical literature are of ‘worst case’ scenarios.

Degos had initially described a cutaneointestinal syndrome in which distinct skin findings (“drops of porcelain”) were associated with recurrent attacks of abdominal pain that often ended in death from intestinal perforations . The skin lesions of this syndrome arise in crops of asymptomatic, slightly raised, yellowish red papules that gradually develop an atrophic porcelain-white center. These papules tend to affect the trunk and proximal extremities. Degos chose the name malignant atrophic papulosis (MAP) for these lesions to emphasize the serious clinical course of the cutaneointestinal disease he was describing. At that time, the cutaneous lesions were then thought to be specific and pathognomonic for this unique disease entity (Degos’ disease). However, skin-limited forms of Degos’ disease have been described , and currently such skin lesions are considered to be a clinicopathologic reaction pattern that can be associated with a number of conditions . Lesions similar if not identical to MAP (الضمور الحطاطي الخبيث لديغوس) have been noted in connective tissue diseases such as lupus erythematosus, dermatomyositis, and progressive systemic sclerosis, in atrophie blanche, and in Creutzfeldt-Jakob disease

Other names for Degos disease (DD) are:

We are building up a library of photos and videos of Degos skin lesions on this web site: if you have any more photos, please send them to judith@degosdisease.org 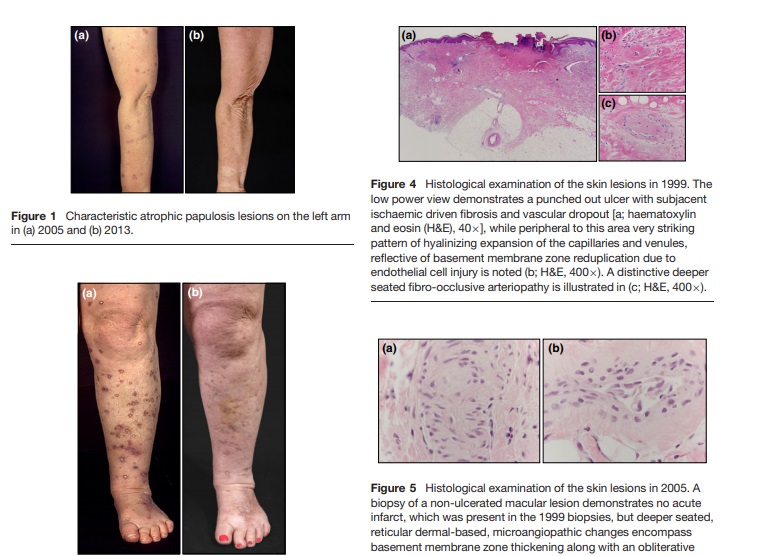 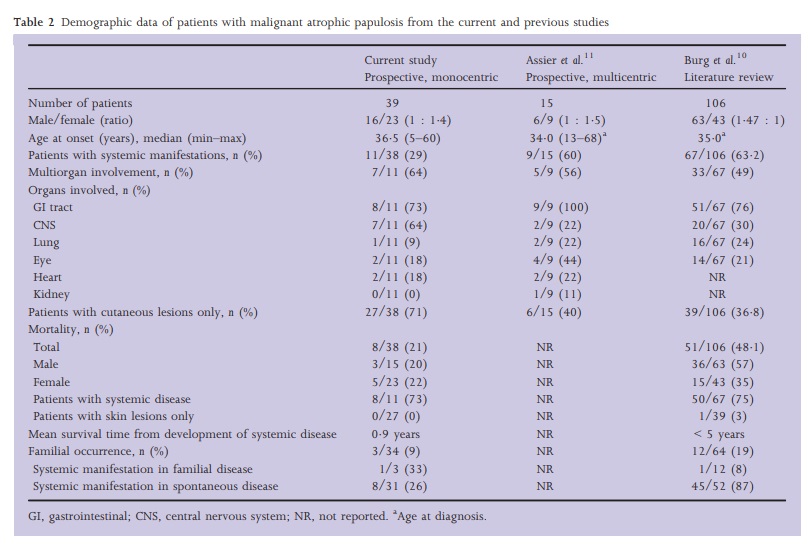