This month we are honored to feature an article written by one of our Steffens medical advisers, Dr Whelan. It summarizes the current areas of Degos research for this ultra-rare disease. This is followed by summaries of two local Scleroderma projects currently underway. One study is being conducted by Dr Swati Mehta, a kidney specialist at Albany Medical College. The other project is an independent study project on Scleroderma therapeutics under the supervision of Dr Jessica Farrell and Dr Lee Shapiro. These are exciting and productive times which we want the supporters of Steffens to be aware of. Thank you again for what your generosity facilitates.

Of Zebras and Elephants: Parallels between pediatric Kohlmeier- Degos disease and vascular manifestations of Covid-19

Patrick Whelan MD PhD and Nicolette Peterson, UCLA Department of Pediatrics In 2007 when we organized one of the first international meetings of researchers and clinicians interested in Kohlmeier-Degos disease (KDD), nineteen families attended along with all the doctors. It seemed like an extraordinary gathering of people whose lives had been affected. In subsequent years, we helped organize study groups at the annual American College of Rheumatology meeting focused on Degos disease. For a so-called “zebra” condition, in medical parlance an uber- rare disorder, this was an enthusiastic series of gatherings. It wasn’t until the novel coronavirus became the elephant in the room, and we hosted an event last November that pointed out the parallels between Covid-19 and KDD, did we find ourselves swamped with attendees at one of these workshops – almost a thousand rheumatologists!

As this community knows well, KDD (also known as malignant atrophic papulosis) is a thrombotic microangiopathy that was first described 80 years ago, and in children 65-years ago. The disease is known in both a benign and deadly systemic form, with girls being significantly overrepresented (3.25:1) in the skin-only variety. Some early cases described onset of skin-only lesions in infancy, with progression to systemic disease only much later (age 7 in one child and age 12 in another). A review of the literature suggests that systemic involvement occurs on average 18 months after skin lesions, as in adults. Two children presented with cutaneous and systemic disease at the same time, but a few actually showed typical skin lesions with onset after systemic involvement.

The cause KDD is unknown. There are very few cases clustering in families, so the role of genetics is unclear. The pathology shows endothelial cell proliferation, choking off the blood supply to the affected tissues (an “endotheliosis”). As the blood flow through those arterioles is compromised, the turbulence of flow leads to formation of blood clots. Dr. Cynthia Magro, the chief of dermatopathology at New York Hospital, has shown that the late components of the complement cascade become deposited, and the effectiveness of eculizumab therapy speaks to the importance of the complement system in the pathogenesis of the disease. Complement is a system of 22 immune-related proteins made by the liver and immune cells that help protect against a variety of different infections – primarily viral but also certain bacteria (eg. bacterial meningitis).

Dr. Magro has also shown that many type-1 interferon-activated genes are upregulated at these sites, pointing to a potential role for this primitive antiviral immune pathway in the genesis of the disease lesions. Damage to the tissue leads to an infiltration by white blood cells, though these leukocytes don’t damage the elastic wall of vessels the way they do in the better-understood vasculitis conditions (e.g. Kawasaki disease).

Only two cases have been reported in newborns, and the lack of response to adult therapies has raised the question of whether the disease is fundamentally different in children. Children with skin-only disease don’t require any therapy, but the specter of the late development of systemic disease (in contrast to the more rapid development of systemic symptoms in many adults) can leave families under an anvil of uncertainty about whether their child could eventually succumb to neurological or gastrointestinal complications.

How rare is this disease in children? We reviewed more than 2 million records from the UCLA CareConnect system for specific evidence of a KDD diagnosis over the past eight years. Only a single child was identified, a 13-year-old girl who had systemic lupus and was found to have KDD lesions on her extremities. But our recent experience with several prominent cases around the world, all involving children under age 5 who presented with multiple strokes despite having few skin lesions, suggested the possibility that KDD may be an underappreciated contributor to the 15,000 strokes that occur annually among children in the United States. Systemic involvement classically causes areas of the brain to shrink, with expansion of the fluid in the brain’s circulatory system (so-called hydrocephalus). Damage to the gastrointestinal tract and rarely to other organs like the pericardium, bladder, eyes, and kidneys also contributes to the misery in the most severely affected.

One recent review of 36 case reports in children with KDD found a male predominance, (20 boys and 16 girls), which likely represents a publication bias toward more severely affected individuals. The average age of onset was 7.5 years. A few cases showed skin lesions developing after systemic involvement, which made diagnosis much more difficult.

So what is the connection to Covid-19? Many young people have been described now who developed a rash in their toes or fingers called “Covid toes,” some of whom were affected after receiving the Covid vaccines. Dr. Magro has shown that children mount a fundamentally different response to the coronavirus compared to adults, with very vigorous activation of interferon-alpha and infiltration of leukocytes into the affected tissues. The complement activation seen in Degos disease (C5b-9) is present in adults, and appears to play a significant role in organ failure among adults who are most severely affected by Covid-19. The coronavirus spike protein circulates through the bloodstream, binds to a human protein called ACE2, and activates complement in adults – leading to the formation of blood clots. But this pathway is very limited in children, and this may explain why kids generally don’t get as sick as adults or are as likely to pass the disease on to others. Whether the more exuberant interferon responses in children with coronavirus infection may help explain why they are so much less likely than adults to contract KDD is something we are exploring. Understanding the relationship between the vascular pathology in both diseases could eventually help each to shed light on the best treatments for the other

Scleroderma Renal Crisis Systemic sclerosis is an autoimmune connective tissue disease with multisystem involvement. It is one of the most challenging rheumatologic diseases to manage as 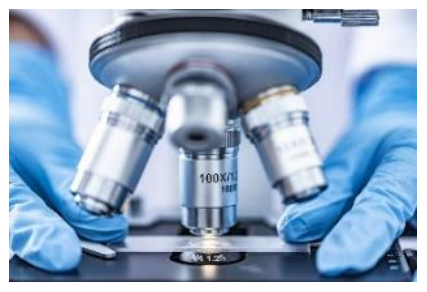 treatments of many aspects of the disease remain inadequate. Serious lung and renal pathology can occur. With the latter, the classic renal involvement is “scleroderma renal crisis” (which will be referred to as SRC hereon). Historically, prior to routine use of ACE inhibitor therapy, this was the most common cause of disease mortality. Even with the availability of ACE inhibitors, renal failure, transient or permanent, is still common, particularly if there is delayed recognition of SRC or disease comorbidities. It has been a well-accepted observation that if SRC does not appear in the first 5 years, its likelihood of occurring is markedly diminished.

However, there have been observed cases where the onset of SRC occurred much later than this expected timeline. The characteristics of this population with “late onset SRC” have not been the subject of study.

Therefore, our objective is to conduct a multi-center, observational, retrospective study to characterize this subset of population with late onset SRC to increase awareness of this aspect of the disease. For this we were granted a 20,000 dollar grant from Scleroderma Clinical Trial consortium (SCTC) for the year 2021-2022. We really look forward to take our study to completion with results that can help increase awareness amongst clinicians and patients suffering from this rare disease. This study involves four centers with leading rheumatologists specialized in scleroderma-
Albany Medical Center (Primary site): Dr. Lee Shapiro and Dr. Swati Mehta Georgetown University medical center. Washington DC: Dr. Virginia Steen Johns Hopkins University, Baltimore, Maryland: Dr. Laura Hummers University of Pittsburgh, Pittsburgh, PA: Dr. Robyn Domsic 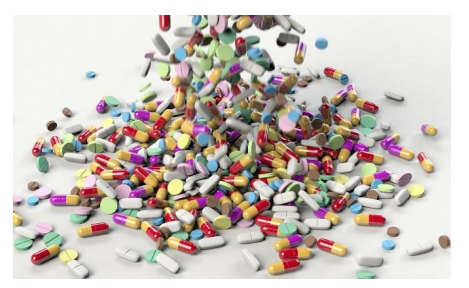 Albany College of Pharmacy P3 student, Taylor Freebern, is currently completing an Independent Study Elective this semester with Dr. Jessica Farrell, for which Dr. Shapiro is serving as a co-preceptor. The coursework includes multiple clinical research projects related to scleroderma and other rare diseases. Most noteworthy amongst the scleroderma focused projects, is Ms. Freebern’s draft of an evidenced-based letter of request for the off-label use of rituximab in treatment of interstitial lung disease associated with scleroderma. This has the potential to be extremely impactful by gaining justification for insurance coverage of this medication for individuals with scleroderma and interstitial lung disease.

In addition to this, Ms. Freebern will give a presentation on rilonacept for chronic pericarditis, a literature review on the use of complement inhibitors (eculizumab) in improving outcomes of scleroderma renal crisis (specifically in those who present with thrombotic microangiopathy), complete a literature review to compare efficacy of methotrexate vs mycophenolate mofetil for eosinophilia fasciitis (scleroderma mimic), prepare a review of drugs of pipeline drugs for scleroderma, and perform a literature review and obtain pharmacologic data from AstraZeneca to assess the central nervous system (CNS) penetration of anifrolumab, a drug understudy as a potential therapy for Degos Disease.

The commitment of Ms. Freebern to focus on scleroderma as independent study coursework is well appreciated and extremely beneficial as background knowledge to assist Drs. Shapiro and Farrell in patient care activities. 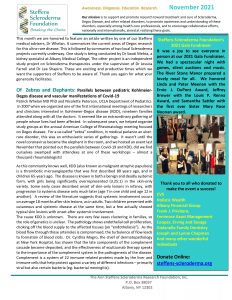 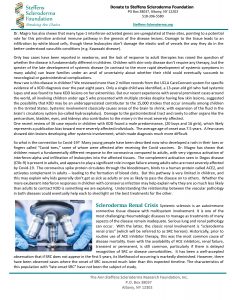 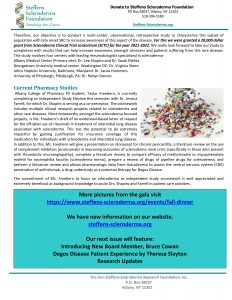